A year ago today I walked out of mercy knowing I would never return as a co-worker. It was time to figure out what I would do when I grew up. The summer was approaching and Emily was doing a travel job in Rolla and Allyson would be going away in the fall so I decided to enjoy the summer.
I had been on women’s health for almost nineteen years and during that time we had done many fundraisers with T-shirt’s. I always knew at some point I would make a quilt but I never wanted to start in case I accumulated more. So my goal was to complete the quilt by this day. I almost always accomplish my goals and this one was no different. So here’s my quilt that I love dearly with a story about each block. I’ll describe in the order you read a book. This blog is for the day I no longer remember much and I can relive the most wonderful memories. Yes, I have always been a nerd and a dork and I will be until I die. 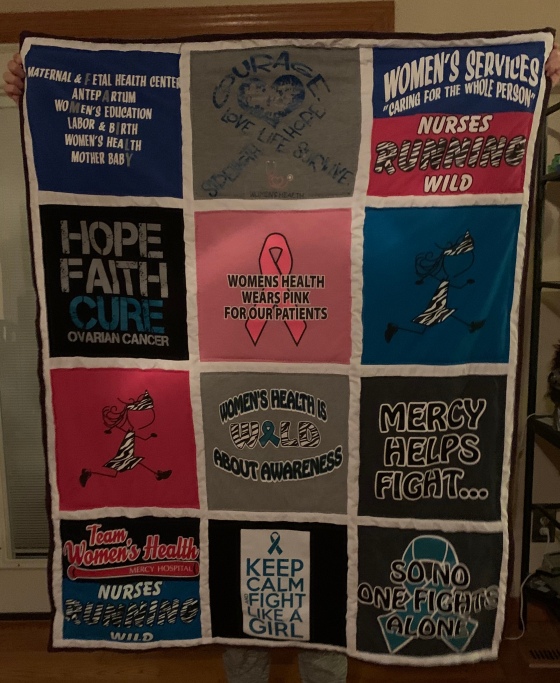 The first block was a fundraiser for the entire women service line. That shirt was the back and I thought it was clever how the word Family was incorporated.
The next block was my all time favorite and the last one. My buddy Tiffani was in charge of creating it. I put the front left pocket area on the back. I loved the stethoscope with the words women’s health.
The top of the next block was the front of the women service shirt and the bottom was the back of another shirt which I will discuss when I reach it.
Next up was one of three trivia nights we did for SLOCA (St. Louis ovarian cancer awareness).
The next is my second favorite shirt and was also our first shirt. It is also on display in the cafeteria as part of a big quilt. (At least the quilt was there a year ago). This was designed by Kim T (now Kim K) and Kristina P. I loved it and wore it to work quite a bit until Mercy went to black uniforms.
The next two shirts are from a Marathon relay that I did with Erin, Laura, and Kim. Both my husband Brian, and our good friend Lindsay were our coaches. They hung out with the three not running and jumped the metro link with us to get to the next exchange stop. That race was so much fun. The nurses running wild was on the back.
My third favorite shirt is up next. That was a SLOCA fundraiser but will always make me think of patient SH. She had ovarian cancer and I took care of her the night of her surgery. Her daughter told me I’d have to light a fire under her butt to get her moving. Several months later I was her nurse when she left this world to meet Jesus. That fall I would run the ovarian cancer run wearing that shirt with Laura and run into her daughters. Such amazing memories.
The next shirt and the one below were front and back from trivia night. I am always reminded of Vickie who was my boss when I left and Lindsay. Lindsay was the most fun tech I ever worked with and she left to become an athletic trainer. Brian always called her wangster Willy which cracked her up.
The top of the next square was from the night Women’s Health went to a cardinals game. I was at Big Stuf camp the night of the game.  So although I didn’t go to the game, I still bought a shirt. I would wear it at camp on jersey day.
I think the last shirt was also a fundraiser but I am not sure. I never wore it much but it is a great reminder of my years on women’s health.
I cannot believe a year has passed. After I left, I really thought I would work at a surgery center. Then my friend Tiffani from my favorite shirt started in the butt hut and told me to apply she thought I would like it. I told her I can’t do IV’s and I’m not working full time. Well wouldn’t you know, they had a part time position and the patients come to the room with an IV. Then a pandemic occurred and I ended up back in ICU where I hadn’t been for almost twenty years. Who would have guessed!!

Mole moral ~ Follow your path no matter how scary or unknown, you may just end in a wonderful place.