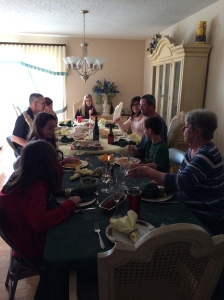 Every year we go to Brian’s parents house for Thanksgiving as a tradition. When I was growing up we never really did much and certainly never had a turkey. It’s probably one of the reasons I really don’t like turkey very much. Anyway this year Chris (Tracy’s husband) was home from the Army so everyone was there. It was totally out of control. It started with Allyson burping like a boy. Then Tyler starts making farting noises with his armpits. Then to top that off he makes farting noises with his knee. Grandma Judy then tells Tyler that is horrible and Tyler says like you could do any better. Tracy busts out laughing and Emily almost chokes. Chris says to Emily don’t spit anything out of your mouth. She didn’t. Then all of a sudden Kyle dumps macaroni and cheese all over his lap. He manages to get it all scooped up into his napkin and Chris takes it out of his lap. I think they might have fed it to the dog but I am not sure as Allyson chose this time to burp even louder than the first. It was quite the comedy hour.

It was one of the best Thanksgivings ever. Chris’s cancer must be stable. I don’t think he has gotten any better but his cancer hasn’t gotten any worse. He has stage 4 lymphoma. He has one more year of military service and then he can retire. So I said the plan is not to kick the bucket until january of 2016. I am one sick nurse. I know it. But hey if you have terminal cancer why beat around the bush. CR always asks and tells it as it is.

Mole moral: If you have manners and etiquette, you have no business sharing a meal with the moles.