Finally after eleven years all is right with the Wizard of Oz. These pictures are  living proof.

It all started back in 2004 when my nephew Tyler was slated to be born by cesarean section on 10/29. I asked my brother and sister-in-law if my niece Sarah could spend Halloween with us. They said sure and then I came up with the grandiose idea to do a Wizard of Oz theme. Emily and my niece Sierra both wanted to be Dorothy and Emily swears Sierra refused to cooperate unless she was  Dorothy. So I being the mean mom I have always been, told Emily to pick a different character. She refused to be the wicked witch and to this day says that should have been Sierra. She finally agreed to be the house that landed on the wicked witch of the east.

I am pretty sure the only way should would wear the costume was to make the house this weird satin pink color and  I was willing to agree to anything.  We did not realize how heavy cardboard would become so she took it off about midway through trick or treating and made her dad carry it.

Making the costumes turned into a nightmare. Kyle’s tin man costume came out three sizes too small so I said screw it and bought him sweats. Allison’s was supposed to have some sort of straw material and I couldn’t find that so I cut up strips of material and made that straw. Sarah’s good witch hat was huge! Her grandpa Jerry called it her Pope hat. The shoe covers for Kayla’s lion costume were in Allyson’s closet for years.

After this I am not sure if I ever made another Halloween costume and swore off sewing for a few years. And then the advertisement for the Wicked half marathon showed up in my news feed.

I could have sworn Emily asked me if she could run it with me but I may have asked her. She swears it was my idea and I came up with the idea to dress up. I told her she would be Dorothy and I was trying to decide between the tin man or the scarecrow. To enter the costume contest they had to be submitted by December. We wouldn’t have our costumes finished until the night before the run. Sometime later I decided to be a flying monkey and used this monkey as my model.

However, I did Emily’s costume first. I knew she was a sweater and needed a running wicking shirt so I bought a plain white one and came up with the great idea to pain the gingham check on it. I ordered the material to make the skirt and must have looked at it in blown up size because when it arrived the print was tiny and I had to make way smaller squares for the shirt. I used 1/4 inch quilter’s tape to make the squares. I bet a put a good ten hours into the shirt. And the skirt should have been a piece of cake but the first time I made it Kayla could barely wear it so I asked Emily to measure her waist. I remade it and when she came home it was huge. I asked her and she said “oh yeah I added two inches to my waist measurement.” I could have killed her because I had to take the skirt apart and for the third and last time put the zipper in. It was still a little big, but I told her too bad you can pin it like when you were little.

And then I started on the flying monkey costume and by the time I was finished, I had sworn off sewing again. I made the grey shirt no problem and then came time for the pants. I ordered the material and the pattern off of the internet and I took my measurements and cut the pattern pieces out to that size. When I got the pants all sewn together I couldn’t even get them past my knees. I wasn’t sure what happened so I had to purchase the pattern again and I decided to make it the biggest size possible which was for a size 45 waist and 54 inch hips. When I had them all together I couldn’t get them over my butt and they barely fit Emily. I said screw it and found a pair of grey running pants. I then started on the jacket. I had found a DIY blog which worked great for the hat but the jacket was once again six sizes too small so Emily and I went and found a pattern that turned out to be perfect. I probably spent a good three hours on the stripes as I had to cut out three different colors for each. Allyson was supposed to make me some wings but she didn’t get around to it and refused to draw them for me so I drew them myself. I also turned the thighs of the first attempt at the too small pants into my shoe covers! 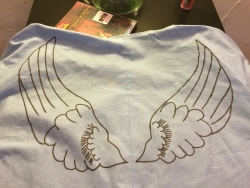 After finishing the race today I am just going to say that our costumes were by far the best. Almost every other Dorothy was a store-bought costume and I was the only flying monkey. I had a lot of people talking to me and telling me they liked my costume. Emily and I had a really good time even if it did rain the first nine miles. That was pretty miserable but we survived. 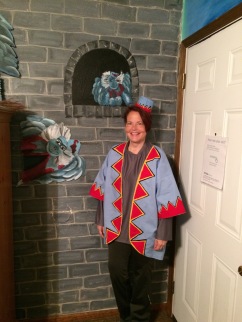 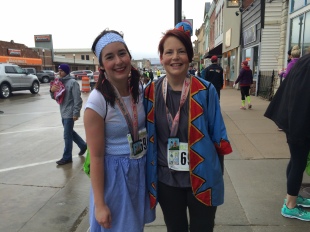 Mole Moral~Good things come to those who wait! Hence Emily ended up being Dorothy eleven years later in a really cool race, with a really cool mom!

I think it was Dr. Phil that I heard the definition of insanity is doing the same thing over and over and expecting different results. This past weeks long run was 16 miles and it rained almost every single day. So this left me with three choices run in the rain (no way, it would mess up my iPhone), use the treadmill (I’d rather rip out my fingernails) or go to the Arnold Recreation Center and use the indoor track. I had recently discovered the indoor track being free to walk and run on. So I picked the lesser of the three evils. So how many laps did I run? Somewhere around 192. Now that is insanity. I had a few people asked me how I managed. Well for one I listened to my Jesus running music. I really connect with God that way but I have to be careful not to be singing out loud. And even worse is if a Kid Stuf song I have to be super careful not to be doing the arm motions. I mean I borderline on a lunatic spending over 3 hours walking/running 192 laps as it is. Just let me sing out loud and do crazy arm motions and the white coats would be immediately sent for.

As different music plays, I am reminded of different things. Lets see Broadcast came on which was the opening song to the very first Big Stuf camp I ever attended. How He Loves also from that first camp in which for the first time I could feel people loved me. That’s a hard one to explain and belongs in a different blog. A lot of my music comes straight from camp. There are songs that make me think of Brent a kid from church that sings in the youth band. Sometimes I heard him sing it before the original artist and well he is just better. My only non Christian song is What Makes You Beautiful by One Direction. The Oak Bridge interns did a flash mob to that song. Sometimes when I listen to it, it’s as if God as singing it to me. It works pretty well for that. Maybe Uncle Larry is right, any secular song can be switched to Christian just by changing the words. Oh how that makes my cousin Eddie crazy when he says that.

This weeks long run is 18 miles and no rain in the forecast so back to my normal running route. And yes I have signed up for a full marathon!

Mole Moral~I can usually find a work around any problem and the track was just such a thing! Yep I’m insane!

Its been a difficult week in the Moehlmann house. Monday was the best day ever but set off an unexpected chain of events that led to more stress than I could have imagined and my itching skin that I had finally gotten under control, flared up again. This leads me to the conclusion I can eat all the gluten I want, and if my stress is under control I won’t be such a dry flaky mess.

Today Brian received the news that his really good friend Dave had passed away. His friends nickname was Korn Dog because Korn was his last name. Dave had been diagnosed with HPV of the tonsil. I remember asking Dr. Chobanian about it at the time and he said he was sorry because that was a really bad cancer. Dave did well for a while after the surgery and treatment although he became very thin and never drank like he use to. It came back and I think he may have done one more round of treatment but the last time he refused and now he is in heaven.

There are so many great Korn Dog stories. One of my favorites was a party Brian attended at their house. I must have been working but I will never forget Brian telling me Dave would let the kids ride on his back while he went down the stairs on his stomach. So it was like the kids were sleigh riding in the house. I can’t even imagine how sore he was when he woke up. He and Brian met when Brian worked at RotoMetrics. They were both on the same golf league with a few other Roto guys. Every year the golf league would have a weekend golf getaway which basically was a drunken fest. Dave laid down in the fairway and fell asleep while waiting to tee off. When it was his time, he woke up, rolled down the hill and hit the ball as if he were awake the entire time. He was one of my favorites of Brian’s friends.

Mole Moral~ Live as if your time is short and focus on what is most important. Love God with all your heart, soul and mind, and love your neighbor as your self. Jesus!