After dinner I was walking along and came across a group of people surrounding a girl on a bench who was hysterically crying. I took one look at her foot and saw this sticking out of the bottom of it close to her toes. It was about the size of the top stick in the picture. 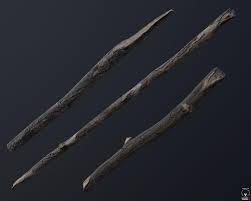 Someone told me it couldn’t be pulled out because there was a barb or something preventing it. It was pretty far under the skin so I had to go into burn unit nurse mode (maybe that’s why I dreamed about the burn unit last night) and take a pair of tweezers and pick the skin apart to reveal the stick. I had gotten about halfway through this endeavor when it was clear we needed a scalpel or a needle or a razor blade. So up comes the official Big Stuf camp nurse with a gadget called splinter out.

It actually reminded me of the really old blood sugar lancet’s from my really early nursing days. So I stabilized the stick while she finished opening it up so we could pull the stick out. The girl did really well. Her group had a wash cloth so the camp nurse washed it and dried it and put a temporary band-aid on. I told her to take a shower and then come to my room and I would fix her up. Apparently the kids with her convinced her that peroxide on it would feel like acid and it would hurt forever. I told her the peroxide wouldn’t hurt but her foot would probably really bother her to put weight on it. So while she is freaking out about the peroxide I sneak and pour it on and it was over and done with before she even knew it. Then a little Neosporin a 2×2 and some gauze wrap and she was good as new. Someone asked why I didn’t use alcohol. I said now that would have burned like battery acid and she would have come out of her skin. Then they asked if I could look at another kids toe. He was so worked up trying to find injured girls sister he jammed and stubbed his toe and peeled the skin off. He already had cleaned and put Neosporin on in, so I did a burn unit toe wrap! It’s been 15 years since I have done any sort of debridement or burn wrapping but it came right back like it was just yesterday!