I have been running off and on with my small group from church when I am not working. We had all signed up to do a 5K or 10K this morning. This race actually benefited ALS and I was planning to run in memory of Bob Stehlin, a friend who lost his battle with ALS about 18 months ago. Packet pick up was in Webster Groves really close to a couple of cakes I had seen back when I was obsessed with cake hunting. I could not figure out where the race started so I asked the guys who were handing out the race packets. They told me it was at the high school just down the street and the race started at nine. They recommended arriving around 8:25 to allow time for parking and getting to the start line.

This morning I woke up at 6:30 with plenty of time to goof around before I had to leave. I arrive at 8:25 at the finish line and see people finishing the race. Thanks to the beauty of smart phones, I got on-line and discovered the race started at eight. I was so upset I nearly burst into tears and knew there was no way I could wait around for my friends to finish running. I am not going to lie, I felt really stupid for having the wrong time and also I had my heart set on running. So I decided I would drive to Grants Trail and do my 10K there.

I arrive at Grants Trail and decided to go the opposite way on the trail. (I start really close to Grant’s farm which is kind of at the mid-point.) I have wanted to run across the section that crosses over 44 for a while now. So I head out with no water because I am supposed to be doing a race and that is provided. After two miles into the other way I was ready to kill myself for my stupid ideas. It was a slow uphill climb for like a mile and a half. I was trying to run the entire thing but after two miles I had to give that dream up. Between the uphill and the going low carb a week ago, it wasn’t going to happen. I did run much father this time than Wednesday when I tried running on the low carb. Anyway I’ve done reading and research and with time it should not be an issue. My game is endurance and not speed so I should be able to do just fine burning fat instead of sugar. While running the trail I passed two of these signs. 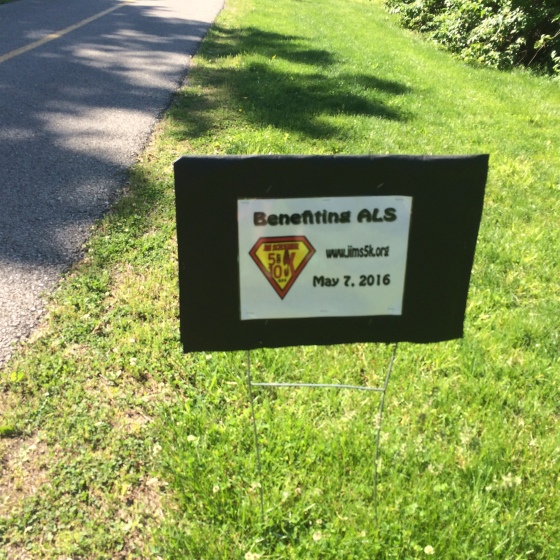 That is the race I was supposed to be doing. So I thought to myself, I’m so glad I didn’t pull a rookie move and wear the race shirt to the race. We learned last semester in group that you aren’t suppose to wear the shirt until after you’ve finished the race and earned the shirt. If I had the shirt on, well it would have been awkward.

Then at about mile 2 1/2 I spotted this beauty and knew I would stop and photo it on the way back.

I had seen every cake at its original location back in the day and I knew this one was not where it originally was. But it was cool to see one again and reflect back on so many good memories with the kids and cake hunting.

I am not sure why I missed this race. Normally I would say God had a reason, but this sounds even more crazy than normal. I mean this race was with my God friends. Perhaps had I run the thing, I would have tripped and fallen and broken my leg. I am not really sure.

Mole Moral ~ This isn’t the first race I’ve missed because I had the time wrong, I sure hope it’s the last. Seriously, I might need nursing home care!