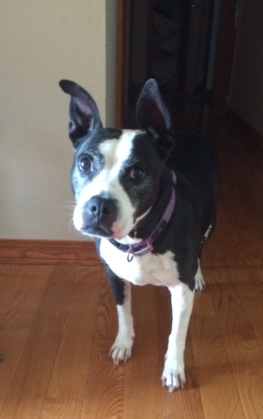 It’s been a while since I have written much. A week or two ago I was going to finally write about my dog but then I added up what I spent and I became so angry again that I couldn’t do it. However, its been a week since then and I’ve had some time to reflect.

I originally took my dog to the vet on a Monday because she wasn’t able to jump up on the couch and started having trouble walking up the steps. The vet did an X-ray and saw an area around T-12 on her spine that was losing density. She had never seen that before and it was concerning to her, so she sent it out to have a specialist look at it. There was a good possibility it was cancer.

I should have called on Thursday to see if it had been read but I’m going to be real here and say I was afraid they were going to tell me it was cancer and she only had a week or two left. By the time Sunday came she could barely stand up and was screaming and crying in the way dogs do. So I load her up in the car and take her to VSS. They come out to get her and she jumps out of the car and starts walking around. They charge me a hundred bucks for different pain medicine and told me to get the x-ray read. I did not know at this time that they were the ones who were suppose to be reading it.

Monday arrives and the dog won’t even put her back leg down and by this time she is only getting up two or three times a day to potty and that is it. I call the vet and inform them she’s coming in. Now somewhere between the time I called and arrived VSS finally took a look at the x-ray. Now isn’t that convenient. They feel she has a bladder infection that seeded to her T-12 vertebral plate. Say what? My vet had never heard of this and because the dog was in such bad shape I had them keep her there overnight. They ran some tests and finally got a urine sample and sure enough Moonie had a bladder infection. The craziest thing is Moonie never acted like she had one. She never peed in the house, asked to go out a million times or anything. Just one day she couldn’t jump up on the couch.

I pick her up on Tuesday because the guy at the desk couldn’t take her whining anymore. They had to take her out of the cage she was in and put her in the extra exam room so she would be quiet. I naively thought after a day or two of antibiotics she would be back to her old self. She came home on codeine, gabepentin, augmentin, vetprofen, and pepcid. I was giving her stuff four times a day. She was on more medicine than half of the patients at my work. After about a week we switched out her codeine for tramadol and she took a second round of antibiotics. She finally got off everything this past Sunday and so far she can do everything except jump up on the furniture.

I realized over the past week that it isn’t really the obscene amount of money we spent to get her almost back to baseline. Although it does make me crazy because I am a money nazi. It’s the fact of how VSS acted and my vet. My vet should have followed up with them on Thursday. I should have called and asked but like I said I was afraid it was cancer. Is this how VSS would treat their mothers, grandmothers, or their own dog. I highly doubt they would mess around and wait an entire week until their dog is in so much pain she can’t even get up to go to the bathroom. However, I know if it was their dog, someone would have looked at it immediately. Often at work I remind myself to treat each patient as if she were a family member. It makes a huge difference with that mindset.

Now that I am calm, I plan to send VSS a letter and my approach will be more about how much needless suffering and pain my dog endured due to their incompetence rather than the money. Because in the big picture money is money that isn’t going with me when I die. Compassion and lack of it may be accounted for in Heaven.

Mole Moral ~ Only a mole dog gets a bladder infection that makes it impossible for her to walk!