I arrived on the ship on a Wednesday and the very next day was a sea day. Since I am still training for the 50k, I decided to waste no time and do my ten-mile run. I was happy to discover the ship track was a quarter-mile so four laps was a mile. That was the day I used GPS and the crazy thing said I did 38 miles with a 3:45 pace. No worries as I adjusted that. It was that first run that I noticed a guy stacking up the deck chairs for the night. He was easy on the eyes as well so it made the time pass nicely.
I didn’t do all the runs I was supposed to because there were days when it was so windy the track was closed. But every time I ran I would see deck chair guy. The day I did the marathon after the second mile it was raining and so windy the deck was closed so I ran on deck twelve under cover around the tables. I actually walked because the deck was wet and I wasn’t falling. Deck chair guy did not disappoint as he was in the towel exchange booth for an hour or so. Every time I rounded the corner there he was. I swear every time I looked over he was looking at me. He was probably thinking what is wrong with this woman running around in circles and in all orange.
So today I decided to be brave and go up and talk to him. His English wasn’t the best and I don’t think many crazy ladies talk to him. I asked if his only job was the chairs and he said no he can serve drinks, and he was a deck server. This cruise was not warm at all so there was not a lot of people out by the pool. So I am sure he didn’t have a lot to do. Plus I swear I’m one of the youngest people on the cruise. I asked to take his picture and I got his name tag because I want to mention him in the email survey about the cruise. His job is one that is not front and center but important and he probably never gets recognition. (It’s kind of like being the nurse that takes care of patients right after surgery, they are too drugged up to remember that nurse.) I did thank him for helping me pass the time while running and told him I was training for a 50k.
I will post his picture but keep in mind two things. One he had a hat on which hid his awesome hair and two he is probably 6/6 and weighed 150 pounds. His pants were always high waters. 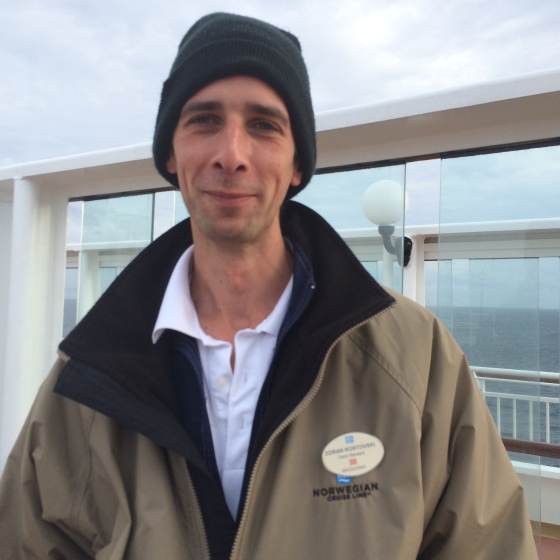 And those of you that know me, know how I like tall and super thin. Hee hee.

Mole moral ~ Take the time to recognize and appreciate the people behind the scenes who are often overlooked.