Change is always hard in the Moehlmann house, although it’s much worse for Brian and Allyson than the rest of us. Anytime an appliance starts acting up, I know I have a battle on my hands.

A few years back my gas stove was to the point that to light the oven, one had to open the broiler drawer  and blow. Brian’s father saw this in action and informed me I was going to blow myself up. Brian kept informing me it was fine. I finally realized he was never going to agree to a new stove so I took his mom out shopping, we picked one out and I had it delivered. He crabbed about it for a while but at least I was no longer in danger of ending up in the burn unit.

Ten years ago our washer stopped working. He was unable to fix it. Keep in mind it was sixteen years old and given to us as a wedding gift from his parents. He was so mad that nothing ever lasts anymore. This was right when front loaders were out so I decided that was what I wanted. I have a confession, I hated it from almost day one. It was way too low to the ground so Brian made a box to elevate it and the dryer on. That made my back happy. However it took forever and I wasn’t sure how clean the clothes were. However this was my brilliant idea so I kept it to myself.

Probably for the last three to five years somewhere around the rinse and spin cycle it would error out F20 which meant there was a water outflow problem. So I would have to stop it, the water would drain out and then run the rinse cycle. This resulted in multiple trips up and down the steps. However I also being cheap I just continued to deal with it. Brian confirmed there was no outflow problem so it was most likely a motherboard issue and to fix it would cost as much as a new washer. So we chugged along.

About a month ago the error started happening 48 minutes in and the clothes weren’t even getting wet. It was now ten years old and I had enough so I got in the car and ordered a new washer. I returned to find Brian had taken the washer apart and told me he could get another six months out of it. I told him too bad I had a new washer coming. He got really annoyed and said he wasn’t taking the old stuff off of the stand. (I went back to a top loader.) I told him not to worry I would ask the delivery guy to take dryer off for me.

So the washer came and I asked the guy if he would take the dryer down. I then added I’ll make it worth your while. I quickly realized what that sounded like and said that sounds bad. Anyhow I gave him and his buddy twenty bucks and told them to have a nice lunch. 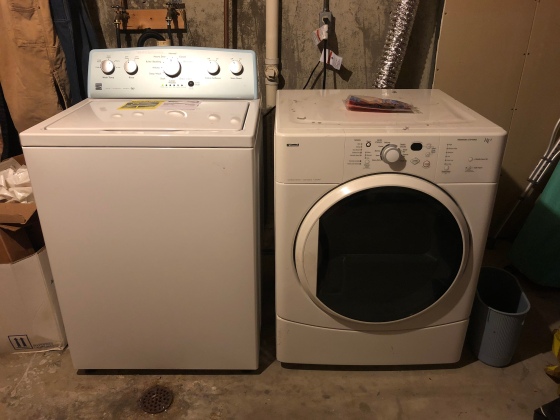 This washer is fantastic. It still takes an hour to wash but the clothes area is so much bigger and the clothes smell great. I feel like they are cleaner. I have no intention of ever owning a front loader again. I would say never but then top loaders would be eradicated and I would be stuck.

Mole moral ~ Sometimes the latest and greatest isn’t all that great after all.