On this day thirty years ago I graduated from Deaconess College of Nursing with my diploma in nursing. So much has changed since then that it is almost impossible to believe. For starters there is only one diploma school left in the area and that is Lutheran School of Nursing. Every other program is either associate or bachelors in nursing. The diploma schools had the most clinical hours back in the day and were usually associated with hospitals. In other words free labor.

I recently looked at my scrapbook to figure out which day I graduated on. I was very surprised to discover I graduated on Uncle Larry’s birthday. I would have thought I would have remembered this but I guess this is why I scrapbook. Things you think you will remember forever you quickly forget.

I must say nursing school has not changed at all during this time. It is still the most stressful time in a person’s life. I swear they do everything they think of to get people to quit and weed out the weak. I mean if you even think about applying they start quoting wait lists and GPA’s and drop out rates. It is just ridiculous. I can honestly say I would never go through it again. One and done. 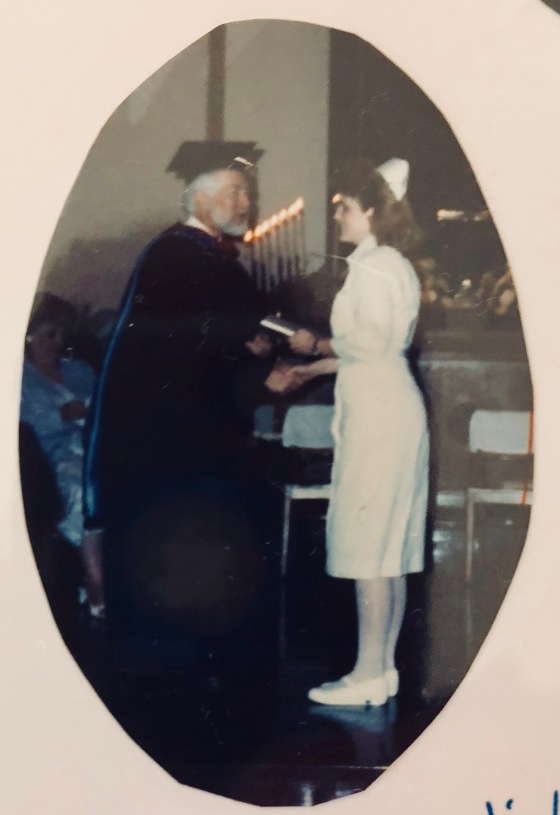 I thought I would list some of the changes over time. Please feel free to comment any others.

I know I am forgetting so many things but there are many others I will always remember.

Mole Moral ~ As I look at my picture I think dang I had a nice figure and yet if you would have asked me back then I would have told you I was fat. My body image disturbance isn’t just a nursing diagnosis, it’s a reality!