Eight years ago when I went to Disney with the family, I took a four hour walking tour called Keys to the Kingdom. I was able to see a lot of behind the scenes at Disney and it was just fantastic. I then read about Backstage Magic which was seven hours long and I knew one day I had to do it. This was the year and I made Emily go with me. It was super expensive but worth every penny to me. We visited five different areas so this blog is about the laundry at Disney.
Disney currently has thirty-six resorts and I have no idea how many restaurants that use linen, tablecloths etc. They have four different laundry facilities on site all of which operate sixteen hours a day every day. The other eight hours are maintenance for the machines. Each facility services specific resorts because you cannot mix the high thread count linens with the low count. We visited the one that is in charge of the value resorts as we stayed in Toy Story at All Star Movies.
The laundry is trucked into one side of the building where it is then hand sorted by employees so that each type is washed by itself. Meaning towels with towels, pillowcases with pillowcases etc. They drop into these huge laundry bags that then run along a track hanging from the ceiling.

Does this remind you of anything? The doors in Monsters Inc. came from this set up. Although the Disney artists never visited textile services it was based on industrial laundry facilities.  They then flow over to the washing machines. The linen has a chip in them which tells the washing machine what item it is and then sets the cycle for that type. It then goes to the dryer and they have automatic folders for sheets, towels etc.
The employees then put them back in the same bins they arrived in. But the bins go through their own wash and dry machine as well. The bins are loaded back onto the trucks that dropped the dirty stuff off and back to the resorts it goes.
If you are looking at the laundry facility, the dirty arrives on the right and the clean leaves on the left. There is no cross contamination. No photos were allowed but our tour girl could take some which I downloaded off of a special website. 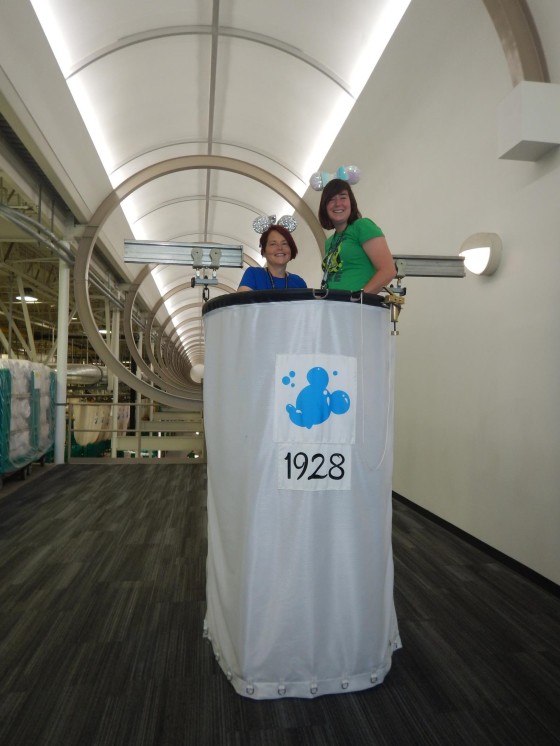 Here’s the kicker. At just one facility if you did the amount of laundry they do in sixteen hours one load at a time, twenty-four hours a day, how long do you think it would take you? SEVENTY-TWO years. Now that’s a lot of laundry!

Mole Moral ~ There should be no more complaining on Sunday’s about six loads of laundry that the Mole house does.