Due to the unplanned flat tire adventure the night before, I discovered we were only thirty minutes away from Joshua Tree National Park. Now I had wanted to visit it four years ago on our twenty-fifth wedding anniversary but it wasn’t anywhere near Death Valley or the Grand Canyon. So I talked the other three into taking a side trip. Little did I know that it was thirty minutes the wrong direction and then forty-five minutes across the park and then another forty-five back and then back thirty minutes. I guess I really shouldn’t plan vacations. But I was very excited to see it.

We stopped in and talked to the park ranger. He told us to see the cactus area but if there were bees swarming to jump out and take a couple of pictures and leave. Luckily, they were not, so we were able to walk around. They had just finished blooming. They were kind of sad looking though. 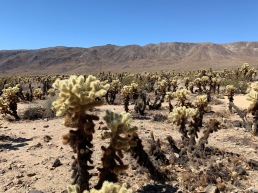 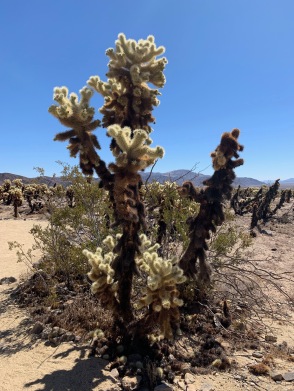 Somehow we managed to end up on the other side of the park and totally missed the biggest tree in the park. When we asked the ranger at the other end she acted like we were insane and had never heard of such a thing. Apparently it is not marked or anything. The prettiest part of the park had this

Of course the day I show up the bees decide to move to a new hive. This is the story of my life. However this is where most of the trees were located so we took a few pictures and then we headed to Salvation Mountain.

It was then time for the six hour detour to see the four corners. Now Emily seems to have forgotten she ever said she wanted to see it but she did. I did some reading about the four corners before we arrived including yelp reviews. The biggest thing that stuck out was the lack of bathrooms. So I made sure we stopped at the gas station before it. When we arrived they did have the type of bathrooms that national parks have. So then Brian was like see they have bathrooms. Someone opened a door and the wind blew the smell our way and it was a hundred times worse than the nastiest nursing home. A short while later I watched a mom and daughter open the doors to all four of them and then head out behind a tent.

I also knew from reading this was nothing but a tourist trap but I didn’t mind. There were native american’s selling hand made crafts. I wish I would have bought the one painting I just loved. If it was flat and would have fit in this one frame, I would have. You have to stand in line to take your picture standing on the four corners. There is a sign that says “limit three pictures per family”. Apparently, no one knows how to read anymore. One family took about twenty while we stood in the blazing sun in 100 degree weather just so mama mole could say she saw it and have our picture taken. I stood in New Mexico because of Shiprock New Mexico. When Brian saw the sign for it, he said “Shelprock New Mexico, home of the Big Red.” 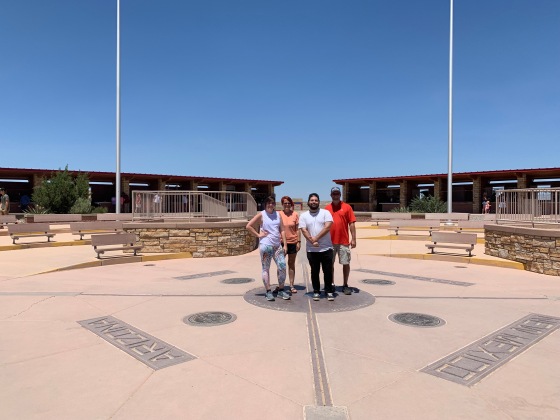 The rest of the trip was spent driving. We made it into Texas before calling it a night. There was a really bad thunderstorm and Micheal was getting nervous about a tornado. Emily texted me and asked if we would have one. I said no and she relayed it to Micheal and he said very quietly “Schleprock”.

Mole Moral ~ Embrace your nickname if you have one. It makes life so much more fun.