I think I discovered Roadside America looking for the biggest ball of twine. I’m blaming this on my father-in-law Larry. I believe it was our South Dakota trip that the girls and I took with him and my mother-in-law, my sister-in-law and her son. When we were planning it, I wanted to stop at Laura Ingall’s Wilders house and he was teasing me about the biggest ball of twine. This was long before I had an iPhone or new what an app was.
I was looking at places to see since rain was predicted all weekend in Destin. I discovered Cross Garden, Hell’s warning label. Reading up on it, it reminded me of Salvation Mountain.  I had drug Emily and Micheal there last summer so they were down for going. Just as we arrived it started raining.
Salvation Mountain is out in California and looking at it gave a sense of peace and love on an acid trip. Driving up to the crosses was scary. Granted the man had passed away in 2004 and it has not been kept up. I felt like I was back in the Baptist church I attended from the age of five to twelve. I could almost hear Reverend Starke yelling during the alter call, “if Jesus is calling you to be saved and you don’t come to the alter and die this week you will go to Hell”. I also thought this represents the south and the Baptist church. I’ll include a few pictures and then copy and paste some information from Roadside America. I found the story fascinating. 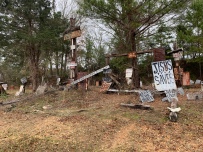 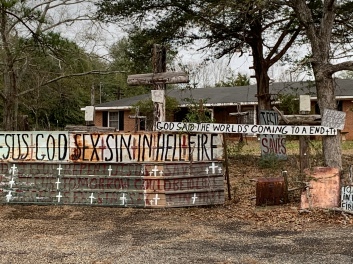 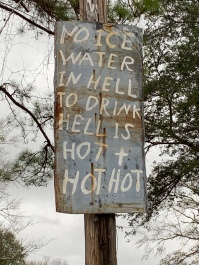 Rice started putting up the crosses in 1976 after his mother died. Actually his parents grave markers are in the front yard of his house. We decided it must be abandoned but paid for because even his red truck with the crosses on it sits under the carport. We didn’t walk on the property but viewed from the street. It was a little too frightening. He felt he was like Noah and called by God to make these crosses. Sadly he only believed two percent of the population would go to Heaven and the rest would burn in hell where it is hot, hot, hot.
I found pictures on the internet of what he looked like and what it looked like when it was kept up. It was much better but still as scary as the thought of hell. I’m glad we went to view it. Tomorrow we will going back to Montgomery to see another attraction that triggered a childhood memory that my mother will enjoy and will live forever thanks to the Internet and this blog.

Mole Moral ~ Don’t let it rain on your plans, find something just as fun to do!!

One thought on “Roadside America Part One”