The next morning we got up and were headed towards Salvation Mountain. We were taking the southern route back home since Emily and I took the northern route two years ago when she moved to California.

We were driving along in the desert for miles. Emily and I were in one car and Micheal and Brian in the other. They were ahead of us by about thirty minutes because we stopped to eat at In and Out burger.

We had come upon the Salton Sea and I was reading up on it and sharing with Emily. It was created by irrigation canals from the Colorado river in the early nineteen hundreds. It was a recreational area in the fifties and then due to pollution and increasing saltiness it started dying off. It is now almost a wasteland and smells from the amount of dead fish that wash up to the shore. It was very interesting, and Emily had just texted Micheal that she was getting nervous about the desert when this happened. 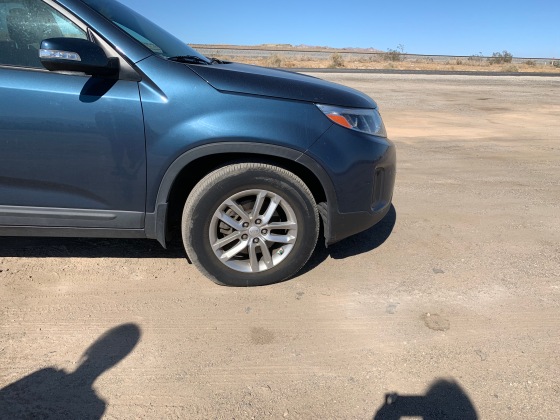 We were driving along when we heard banging in the wheel well. We were like what was that? I said to Emily, you have a tire pressure light so if it doesn’t come on you know we are good. The words were barely out of my mouth when the tire pressure light came on. Luckily we were at a place in the road that had a huge place to pull off. It would be easy to change the tire. And then I had to make the fatal phone call to Brian to tell him we had a flat. Micheal swears he has no idea what Brian said after he hung up with me. I am sure it involved cursing. They had just gone through border patrol (we were super close to the real border) so coming back they were asked what they were doing. It was at this point I jumped out of the car and said I’m going to check out the Salton Sea. It looked super close. Please keep in mind I have never seen The Hills Have Eyes but the other three had. So Emilys anxiety is through the roof. She is texting me every two minutes to make sure I was ok. It was 107 degrees this day and I barely even sweated walking the one mile round trip. I didn’t get super close because it started smelling like mud and death.

By the time I walked back Brian and Micheal arrived and were changing the tire. It was around five in the evening so we had to attempt to find a tire place that was open. The first place I called did not have the tire and then the fun began. I could not keep straight what two towns we were between and Emily was ready to shoot me. I finally called AAA to see if they could locate a place when Emily found one. Of course it was thirty minutes back the way we had just came but they said they would stay open past six as long as we weren’t too much later than that. We arrived at five minutes until six and there were at least three families there that were still being helped. By the time they finished looking at our tire, putting a plug in it for free, airing up the spare (it had lost a lot of air on the ride over), and putting it back on it was after seven. I made the decision to stay where we were and go eat and have a couple of drinks and turn in early. We went to a restaurant that had just opened and their service and food were ok. However I had two gin and tonics and wasn’t feeling anything. The next day would be another adventure.