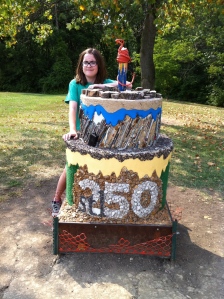 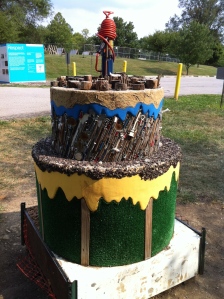 It was a fun night last night. Brian was in bed, Emily and Kayla were out and Allyson was reading in her room. And what was I doing? I was bidding on the Stl250 cakes. When I first heard they were up for auction I really wanted the      Laumeier Sculpture Park cake. When Allyson and I went to see it this summer we were fascinated with the way it was designed. There were pencils and rocks and screwdrivers and fencing and all kinds of stuff. The bid on that took off and was out of my price range right away.

So I turned my sights on the Harley Davidson Cake because it is orange and my favorite color. I was added to the stl250 cake way to the west Facebook group a couple of weeks ago and what a blessing that has been. I met Andrea and her love of cakes and knowledge about them is amazing. She told me that the Harley cake was originally supposed to go to Fast Eddies so if I looked on the base I would see the Pisia bird. 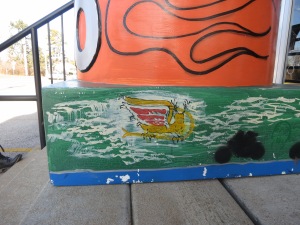 Just mentioning that bird brings back one of our most frustrating cake experiences ever.That was the day Kayla, Dominic, and I did a ton of cakes in IL. Alton was a nightmare and the address listed for the bird took us to a subdivision. I thought it was like a real bird statue. We finally found Alton Visitor cente,r they told us the bird was on the way to Grafton on the great river road. When we saw it, we wanted to set the cliff on fire. Its a painting of a crazy looking bird on the side of a cliff. That was also the day I got a new iPhone, took all the cake pictures and came home and plugged my phone in and set it to my old phone settings losing all of my cake pictures. Three hours of research later I discovered how to go back to the first settings and retrieve the photos. I ran into Kayla’s room and sang the Doxology to her and Dominic because that was such a long day we did not want have to redo them.

So back to the bidding. I had a limit and then found out a friend wanted to give me some money towards it. The Harley Cake was quickly reaching my max so with 15 seconds left I bid my max amount of money on the sculpture cake and won it. Allyson was very excited, especially when I told her I wanted to give her the cake when she is older. She is my artist and the cake just makes me think of her.

Brian thinks I am a fruitcake for wanting “some stupid cake”. He does not realize that first of all its art and second of all it represents so much for me. First of all its a reminder i set my fear of not knowing where i am going and went to places in St. Louis I would have never ventured to! Each cake holds so many memories with the people who were with me when I found each cake. All the yelling and screaming when we were lost and the euphoria when we finally spotted one. It was a crazy fun summer and fall and I am sad it has come to an end.