Having creative kids can be both a blessing and a curse. Allyson says to me on Tuesday that her friend Kurtis birthday party is Saturday. She asks me if I can make the flag of his country he created called Atica. She then adds can you make it the size of his door. He currently has the Canadian flag hanging there but she thought this one would be cooler. So she drew me this picture

I took a look at it and said yes I think I can do that. Then she wanted to know what sort of material I was going to use  I said how about silky and she agreed that would work. When she came home from school she asked if I had bought the material and then approved. It took me a while to decide how to cut it out and work out the math. Of course I managed to cut the blue square the wrong size and make another trip to Hobby Lobby. Once I got it together I felt like the red was too narrow. I had to tell myself you are not Betsy Ross, it looks fine. The best part was my cricut cutting machine has a setting for silky material so it cut that star out. That was freaking awesome! Here is the final piece to which Allyson said what if Kurtis doesn’t like it? I said I will wrap it around his neck and choke him out. Allyson then told me that was just a little extreme. Maybe, maybe not. 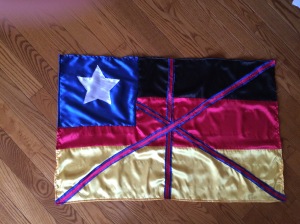 Mole moral~Fun with flags is from Big Bang Theory. Sheldon my favorite character and his girlfriend Amy did a cable show. Also I can pretty much do anything I set my mind to and this flag made hemming Emily’s bridesmaid dress a piece of cake

One thought on “Fun with flags”