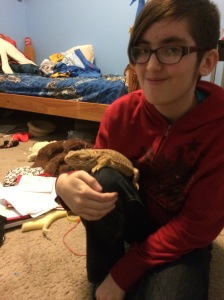 Allyson has wanted a bearded dragon for about three years now. This year I decided to look on Craigslist to see what i could find. The first person I contacted had already gotten rid of theirs but the second one still had his. He wanted 150 for the entire set up including a brand new 50 basking light, the dragon, a cricket keeper, cricket food, calcium, bearded dragon food and sand scooper. Due to Furfest it was two weeks before I could go pick him up in Collinsville. The guy said the cage was too heavy and I would have to come to his residence to pick him up. My mother in law told me not to go by myself because I would be killed for the cash. So I talked my friend Holly into coming since she was out on medical leave and on home oxygen. I figured if he tried anything, I would just pop him with Holly’s tank. The guy actually ended up being very nice and very helpful. When he lifted the hiding thing up and I saw the size of this guy I said oh my God, he’s huge. Then I said I mean that’s fine, I just thought he was much smaller from the picture. My in-laws agreed to keep him but I didn’t want to burden them with him so I decided to hide him in my closet for two weeks. And yes I ran an extension cord into the closet so that I could run the basking light 14 hours a day like I was supposed to. I was putting his hiding hut back in when a piece broke off and the thing hit him. He super stuck out his beard and if he could hiss, he would have hissed at me. It would be four days before I could get him to eat anything. He won’t touch his bearded dragon food. I finally got him to eat some Kale. I know you are all thinking that Allyson would find him before Christmas. However, my kids know the Christmas presents are always hidden in my closet and they don’t want to ruin Christmas so they never go in there. Emily yelled at me this year for telling her what Kayla’s ornament was and told me I was ruining Christmas. So Christmas afternoon came with the Moehlmann side of the family and after all the presents were opened and Allyson didn’t get anything from grandma and papa or Jeff and Teresa we told her to go look in my room. She finally found him and she was excited but mad at me for keeping him in the closet for two weeks. She told me he was touchy and in a bad mood. We moved him into her room and she informed me he had to be off of the floor. So I said you mean like a TV stand or something and she said yes. He didn’t like people towering over him. So this morning we went to Wal-Mart with no luck so I got the grand idea to go to IKEA. I had never been there and the store was really cool. We found a dresser that would fit the tank on top of it. This worked out perfectly as Allyson has never had a dresser but has shared Kayla’s triple dresser in Kayla’s room. Brian worked extra today so when he got home he got to assemble the dresser. Allyson also did not like the sand that the previous owner used so I bought reptile carpet to put in the bottom. It can be washed and reused. I bought one for a 50 gallon tank and wouldn’t you know it was too long and too skinny so I whipped out my sewing machine and pieced it together. 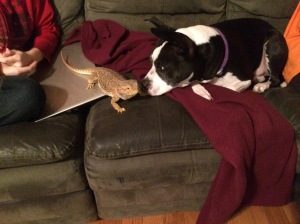 During this time Allyson had to get him out of the tank so that i could vacuum the remaining sand out of it. He was kind of being a bully so I texted the previous owner to find out how old the dragon is. He’s a year and he said that the dragon acted all tough with him and just ignore that behavior. He was fine after Allyson got him out and as you can see he was quite interested in the dog and kept moving closer and closer to her. She managed to lick his face. Allyson had fed him five crickets before we got him out, so she was rushing me to finish the carpet so that he could digest his food. She said he needed the lights to do this. No pressure or anything. She had no problem picking up a cricket and putting it in his cage. Yeah I thought it was fairly gross but not as gross as at the pet store. We asked the guy about meal worms and he said he had to get them out of the fridge for us. He then informed us that if they stay room temperature, they will turn into beatles. I think I puked in my mouth just a little. Of course Allyson held one of the worms and was not afraid of it at all.

Because Allyson got a dresser, we had to rearrange part of her room. The girl is a pack rat and I bet I spent two hours working on it so that I could vacuum. I made her go through all her drawing papers and recycle those that she no longer wanted. The recycle people will love us this week. We moved her bookshelf and put the dresser where the bookshelf was. As soon as we got him up there, she announced he was much happier. He watched Brian put the dresser together and was very interested. I have already moved Allyson’s socks into her dresser.

I had been keeping them on my dresser because she wants hers to match and Kayla never does so she didn’t want Kayla wearing hers. So now my room is less messy. Score!

Mole Moral~The simplest projects turn into big projects. Who would have guessed a bearded dragon would lead to a new dresser and a trip to IKEA.

One thought on “Coming out of the closet”