I’m an animal lover and especially of dogs. When I was little I had no intention of getting married or having children but was going to own a dog farm instead. Somewhere back in 1985 I met my future husband and the dog farm went out the window. Growing up we had two dogs. The first was fluffy a black and white beagle who was a great dog. My mom didn’t feel it was fair to leave her tied up to the dog house and needed a place to run. She told us she had found a man with a farm to take her. I would find out many years later she gave her to animal control. I am pretty sure everyone knows how that turned out. Our next dog I found in the paper. He was a terrier mix and we named him Frisky. He was a great dog too and one day he was walking with my friend Diane and I to the little store when someone shot off fireworks. Those made him crazy and he shot out across the street and got hit by a car right in front of me. The girl who hit him was actually a neighbor so she took me home to get my mom. By the time we got back he was gone. My mom dug a hole in the backyard with the help of Diane’s mom and buried him later that evening. About six months later she read the book Pet Cemetery and had a heck of a time sleeping knowing he was under her window.

Brian and I were married less than a year when a friend of his at work had a litter of beagles so in April of 1991 we brought Annie home. The stories I could tell of that crazy dog are endless. She ate everything that wasn’t nailed to the floor and lived another day. Some of the most unusual were an entire bar of soap (Irish Spring I do believe), a tub of margarine, 200 Ande’s mints, the top to mine and Brian’s wedding cake (it was chocolate too). She was so good with the kids and one day I locked myself out of the house with Allyson in it by herself. She was maybe 18 months at the time. I had to borrow Beverly’s car to drive to the credit union to get my extra key from my sister. When I got back I found Annie and Allyson underneath her baby bed. Annie left us when she was 15 and I first told the kids she had a brain tumor but I am a horrible liar and they learned I had sent her to heaven. She was walking around pooping and not even knowing it. If you startled her she would attempt to bite you because she couldn’t hear well. She would wake up in the middle of the night howling thinking it was time to eat. It was the hardest thing I ever did, but it was time.

When Emily and Kayla were little we had two Guinea Pigs. They were Wilbur (from Charlotte’s web) and Clumsy. (Don’t let kids name pets). Wilbur was wild hair and brown and white. Clumsy was all white and I wanted Emily to call him Whitey but she would not cooperate. They were great pigs and lived for at least five years. Wilbur died first and then Whitey. For some reason I just wrapped them up in newspaper and put them in the trash. I am not sure what the heck I was thinking. We went through a hermit crab phase and when they passed we buried them where our tomato plants grew. Emily had a rabbit named George that hated everyone except for Allyson. She was the only one who could pick him up. After Emily went to college I would open the door and waited until he jumped out before I would make a mad dash for the bowl before he could come back in and try to bite me. When he passed away I put him in the deep freeze until Emily came home for the funeral. (He was triple wrapped and not near any of the food). It really sucks calling someone to tell them their pet died.

And I got to do that again today. Emily has two Guinea pigs. She got the hairy one first and then started reading about hairless ones. There is a breeder in Red Bud IL so she contacted her and we went and got him one day. That girl lived out in the middle of nowhere and her guinea pig room must have had two hundred pigs in their. Some were hairless and some carried the gene. I just can’t imagine cleaning all of those cages. Emily named them Squeaks and Squawks. 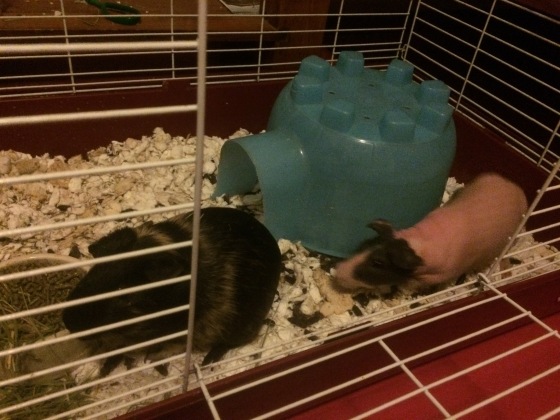 (She’s still a kid with the names). She’s been in Oklahoma this summer doing her first full-time PT clincial’s. They gave her a place to stay for free so she decided to leave the pigs with me. This evening I went down to feed them and found Squeaks gone. I was more upset about having to tell Emily than having to wrap up Squeaks. So I brought Squawks upstairs and held him for a while. Squeaks was laying out in the cage and Squawks had barricaded himself in his hut and put the food dish in the entry way of the hut. I have no idea what that was all about. After that I went running and I hadn’t even hit two miles before Emily started texting me links to Guinea Pigs for sale. I told her Squawks needed time to grieve and she can find him a friend when she is back in Missouri.

Mole moral ~ My friend Meg Barry says Squawks looks like a ballsack so I am happy to say Ballsack lives!