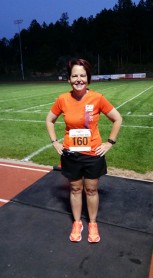 I can’t believe the race is finally over and I finished it and can still walk. I was up at five in the morning as check in was at five forty-five and the race started right at six. There were around three hundred runners but it was not a chip event so everyone started at the same time. The interesting thing about ultra events is most of the people are not about sprinting and speed but finishing it. Those that come in first are super fast but the majority are just normal people like me.

The first fifteen miles went by pretty fast and I felt great and then the uphill climb started and lasted eight miles. The course was on the Mickelson trail and was an old railroad track so the grade was between 1-4%. I had run hills all summer but not one continuous uphill thing for eight straight miles. So pretty much mile fifteen until twenty-three was awful. When I finally reached the check station before the turn around Brian asked if I wanted him to come down with me and take my picture. I said yes of course. 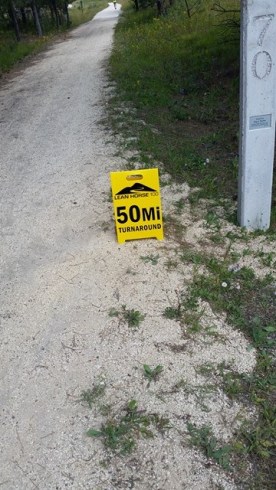 When the aid station asked if there was anything they could do for me I said “please kill me!” They asked me how I wanted it done and I said quick and fast. At least I knew that in two miles I would be headed downhill for eight miles. I was slowing down a bit as the temperature reached a maximum of 88 degrees with full sun on most of the trail. I realized around mile thirty I would not make the twelve-hour mark I had in my head.

The next difficult section was mile forty to forty-five because it was another straight climb up. I was about ready to off myself and questioning why I ever opened my mouth and said I want to run fifty miles for my fiftieth. I also realized that the cutoff was sixteen hours because this course was tough. The original run I had planned to do back in April was pretty much flat and had a twelve-hour cutoff. I thought I was never going to reach mile forty-five and see Brian but I did and he was drinking beer with a buddy he had gotten to know over the day. His brother was running ahead of me. His new friend said its all down hill and I said again just kill me but I took off for the most mentally challenging section.

I was tired and I wanted to die. I had three huge blisters on my feet. My music died with one mile left but I dug deep. I thought about all the ridiculous things I had done to prepare for this race. Back when I was training for the 50K, I did my 26 mile training run on a cruise ship in the dining area because it was raining. I ran 28 miles at the Arnold Recreation Center because it was going to be over 100 with the heat index. I got up and ran when I didn’t want to. I had made it to twenty-four miles of long runs when I came down with the five-week headache and then picked out a new race and started the training over again. I told myself if you can do all this five miles is just from your house to Imperial main street where you get a drink and use the bathroom. 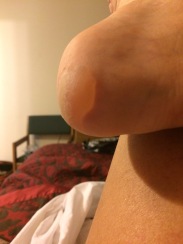 Finally I saw the track that I was going to finish on and I started crying. This made running impossible, not that I could run even if I tried. I just thought back to how this all started over a year ago on fourth of July weekend when I remembered I said I wanted to run fifty and my birthday was the next year. I found the training plans and wrote it out and didn’t look back. And now I can say I finished the beast in 13:57:38. There were 10 gals in my age group 50-59 and I came in third! I really thought I would be more like second to last so then I start thinking maybe I should do another one. Then I smacked myself upside the head and came back to reality.

Mole Moral ~ When you set a goal and achieve it, it’s the greatest feeling in the world.

3 thoughts on “I finished the fifty mile run”