Most of my Facebook friends saw my post today but that turned out to be only half of the story. And because I always have a story, I decided this one is blog worthy.

This morning work called me in early. I was driving down 270, minding my own business, singing Big Stuf camp songs when it sounded like I blew a tire or something on the passenger side. I immediately pull off, crawl over to the other side and get out to look at my tire. I discovered this

I then took a picture and sent it to Brian. I then called to ask if I should drive to work (I was about three miles away). He suggests I call triple a and have them put on the spare. So I call work and then call triple A. I decided to use the free time to friend request people on Pokémon Go to complete the latest task. The guy shows up and I get out of my car to look at tire with him. It’s at this time I notice the side of my car 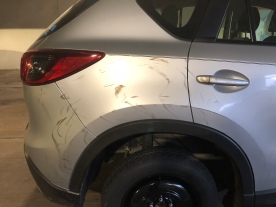 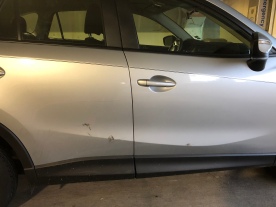 I do believe the first words out of my mouth were Holy F bomb. First of all,who manages to run over a bungee cord and then have it wedge itself into a tire? The same person who then has the tar beat out of her car by said bungee cord. Luckily the other hook end broke off before it did even more damage. The guy changed my tire like a NASCAR professional and was super nice and I could tell truly enjoyed his job. So off to work I went remembering the last time I had a flat.

It was maybe January of 2001 and again I was on my way into work. Brian had taught me how to change a tire by jumping on the tire iron to loosen the lug nuts. So I first called work who told me I had to come in after I got tire changed and then I called Brian. His response was can’t you change it. I said sure if I wasn’t five months pregnant and it wasn’t snowing. So he reluctantly agreed to leave work an hour early to change it. Of course it was on the driver’s side which was also 270 traffic side right before Manchester. While I am waiting for him a cop shows up and I tell him my husband is on his way. He says oh good I just came on duty and I don’t want to crawl on the ground. Next the roadside assist guy shows up, I tell him my husband is coming and he also leaves. I probably shouldn’t have told Brian this because he was beyond annoyed. But he changed it and on to work I went.

Mole Moral ~ If you are going to have tire trouble make sure you do it on the busiest most annoying highway and destroy your car for good measure. Bahahaha