Last night was our fourth subdivision block party. Every Saturday from 6:30-7:30 pm one of the original homeowners who is also a DJ plays music. He has super powerful speakers as it can be heard all over our street. I had received an email stating the news would be coming as well. I persuaded Allyson to come out with me for a little bit. After she left, one of the neighbor girls hung up a sign that said, “Fur suiters welcome here”. I read it like five times to make sure I read it right. So I went home and told Allyson what the sign said and she should put Prince on and come surprise the kids. I assured her no one would know it was her. She wasn’t so sure at first but when I came back with the ice cream she was almost ready to come out. If you are wondering what a fur suit is, you can read about her fur suit creations here. 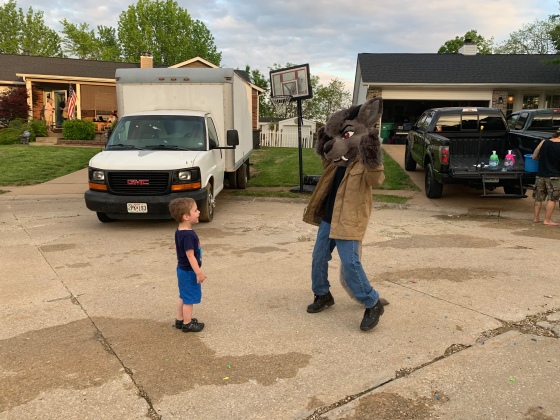 and at first the kids weren’t too sure about this. Allyson has an original character named Prince and commissioned a girl to make the actual head. The fangs make him look scary but indeed he is just a kangaroo with a really long tail. The girl that posted the sign was so excited she wrote Prince a note asking if they could be friends. Of course Prince nodded yes. Then she got her suit on as well and they had a great time interacting and playing with the kids. 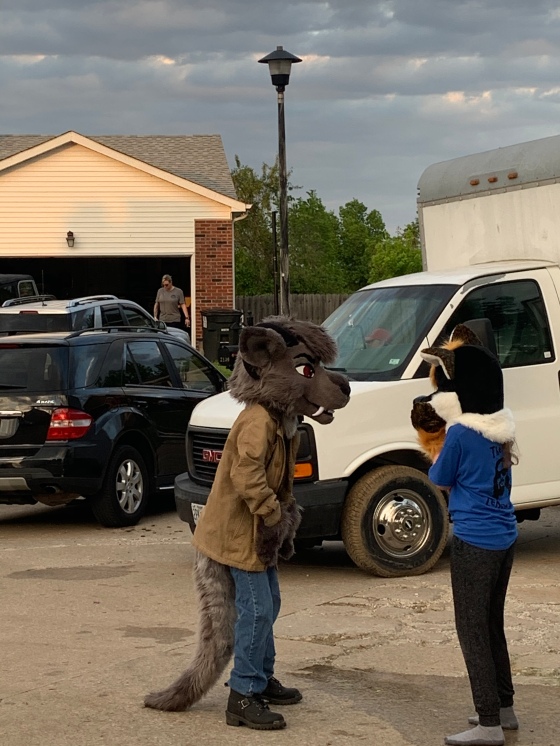 Also way over a year ago at church a guy came up to me and informed me he was my neighbor. He lives in the very first house. He is not the original occupant (that man I believe is in jail) but bought the house to stay at when the Rams played. His wife passed away a few years back from cancer. I chat with him at church and wave when I see him on the road. A few months ago he introduced me to his friend at church and then I noticed that a car was at his house a lot. (Yes, you all know I am a stalker with mad door way assessment skills.) Yesterday before the party he told me that she was his girlfriend. I was so happy for him! It made my heart skip a beat. Last night I was chatting with the two of them and discovered their first date was at The Local House. This is where Allyson is a bus girl! I must be getting old or soft or something because it made my whole evening. This morning when I ran by his house, this was in the front yard. 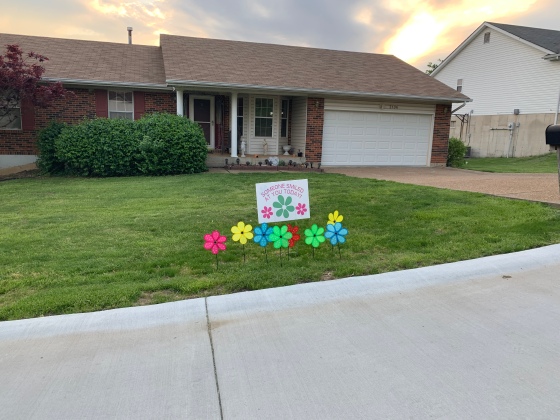 What a nice surprise for him! He is so nice and has been so nice to me that I am glad someone brightened his day!

I was so proud of Allyson last night that of course I told all the adults who it was. Our neighbor said she should hire herself out for kids birthday parties, she could make a fortune. Back in middle school she performed for an assembly and I was told she was a huge hit!

Mole Moral ~ In a world where everyone seems isolated we really are all connected in one way or another!