Yesterday was the Big Stuf Olympics and in true form it was blazing hot. It seems like every year its the hottest day of the summer. That is probably a bit of an exaggeration but just sitting in the shade had me sweating a lot! The Olympics always means camp is fast approaching and it is used as an ice breaker for the kids to get to know each other. This years theme was The Hunger Games. They even had 12 districts. 7,8,9,10,11,12 grade girls and 7,8,9,10,11,12 grade boys. It was very clever and all thought up by the Obterns. They are college aged kids who spend the entire summer working as slaves for the church. Well not really but they do a lot of service work and are the counselors at camp. This year I am riding the pink bus with the tenth grade girls. I told them they all had to win so we would be first on the bus. In true fashion they rocked it and came in first. There first event was to run to the cornucopia in the middle and grab stuff to dress up one member of the team for a fashion parade. The kids were very creative with what they had to work with. I think a lot of the stuff came from the Kid Stuf prop box. Next up was the egg toss and Allyson had hers break all over her hand. Next was a three-legged race and they had to spin around a bat five times and then come back. Now that was hysterical. Some of the kids hopped there and back. Some fell and ended up crawling. The adults were dying. The next event was busting water balloons on one persons head. That was good for cooling off. The final event was running to the table grabbing a paper bag that had unknown food in it and the team had to eat all of it. They had three bags to do. Allyson’s group got donuts, jalapeno’s and saltine crackers. Sierra’s group got Oreo’s, baby food and peanut butter. They said the baby food was disgusting because it was warm from being outside. One group got cottage cheese and the other a gallon of milk. This is why I watch and forget about participating. They ended the day with hitting each other with paint balls in pantyhose. Sierra and Allyson were a painted up mess! 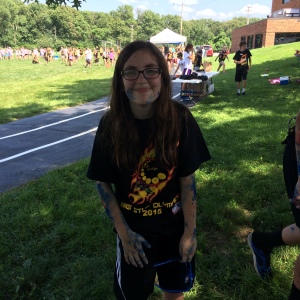 Church was really good before the Olympics. We sang a new song He Is Jesus As soon as it was over I knew I would be adding it to my running playlist. Later Tom came out and said it’s the theme song of camp this year. I should have known. So I’ve already listened to it three times. I cannot wait until camp. Church was very much like a day at camp so when Herc asked if I was ready to for camp I said yes super fast. This year I will not be out half the day cake hunting and will go to bed at a decent hour. All the buses are full which means if I want to nap, it will be on the floor jammed between the seats!

Mole moral~I may be old but the best part of camp after the sessions will always be the bus ride!